After a couple final punches to the gut from Vietnam, our Tiger Airways flight landed in the lackluster city of Surabaya, East Java, Indonesia. We had focused most of our research back home on Vietnam and weren’t very prepared for Indonesia. The first thing we noticed from the jet, was the landscape of incredible Volcanoes making up the many islands of Indonesia. I wanted to take photos from the window but a young girl had the window seat and was sticking her head directly in the window slot.. grrr.. share ??

Next thing we realized, even though we had read about it, was that Indonesia has the largest Muslim population in the world with just over 200 million. So from the moment you exit the plane in Surabaya you hear the music and chants over the loud speakers.. the call to prayer maybe ? For us, it sounded almost eerie and foreboding but for Muslims, it represents something extremely calm and important. We hear it everyday, everywhere and seemingly at any time of day .. We’ve gotten quite used to it and are actually beginning to like the sounds and music… ok maybe not at 5:30 a.m.

Back to the airport .. I met a Indian fella at the urinals of the bathroom. He said “backpacking?” to me, and I said “yes” .. that was all it took. We were headed to the same place, so we teamed up for this part of the journey. Our goal was to make it to Mount Bromo, a smaller volcano located in the crater of an enormous one called Tengger Caldera. Together we found our local bus to Purabaya Bus Terminal and from there hopped on another local bus to Probolinggo, a small town at the foot of the massive volcano. From there, Saurabh, our new Indian friend, had prebooked a tour of the entire area so he had transport for us up the volcano.  Prior to arriving, we weren’t quite sure how we were going to do this, so Saurabh was a great ally to have met.

Our transport was a very cool, bright yellow jeep style vehicle with 4 wheel drive. We crammed into this thing and climbed the volcano for about an hour.. twists and turns, steep hills and crazy cliffs to either side of the vehicle.. what a climb!! The climate changed as we ascended .. about 3/4 of the way up he turned off the AC and opened the window to Canadian style frigid air .. cold !

At the top, Saurabh was dropped off at a cool homestay from the tour operator .. It was about a 5 minute ride to the rim of the volcano, so Sylvie and I decided we wouldn’t stay there .. we wanted to be walking distance from the rim. So we continued on to the cold village of Cemoro Lawang.. something right out of Far Cry 4 .. or for you non gamers, ummmm … like movies you see of Nepal .. or the Himalayas .. Mongolia even. Cold weather, Hindu and Muslim culture face to face, wooden Asian shacks, small horses everywhere, ceremonial areas, flags and statues, 10 year old boys buzzing around on large 400 cc street bikes .. for real ! The village was breathtaking .. it was so quiet and serene .. even the eerie loud speaker music and chants were soothing in this place. 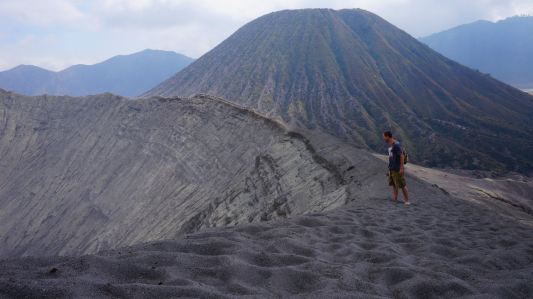 We made our way through the village and turned a corner near the top and then BAM !!! Like we were watching BBC Planet Earth .. the most amazing vista of our lives.. Mount Bromo and Mount Batok inside the enormous crater of it’s parent volcano. Words can’t describe .. mind blowing ? Something I had only witnessed under the effects of serious hallucinogens ?? Burned in my brain .. best thing my eyes have faced .. Sylvie agrees 🙂 Check out the photos .. If you are truly interested in this reading, hop on Google Earth and do a 3d sweep of this area .. you’ll get a good sense of the crater and it’s 2 smaller volcanoes.

The crater floor was flat flat flat .. a gray ash desert. I “think” without having done my research, that the parent volcano was formed first long long ago. And eventually cooled to form this flat desert about 100 meters down from it’s rim. Then Mount Batok must have been formed from a lava tube left behind from the parent .. it cooled and finished it’s cycled and then later, Mount Bromo was formed in a similar fashion and still brews today.. sulfur steam spews out all day and night of this active volcano.

The next day, we trekked down the steep cliff side of the volcano rim to the desert floor.. we marched across the desert towards the 2 volcanoes.. and we climbed Bromo. Up top, we left the safety of the fenced area and moved higher still along the crater lip.. a very very scary walk with many “you ok Sylvie??” questions.. We made it to the highest point and sat for a few hours marveling.. in awe .. on another planet. We had the volcano to ourselves .. there were maybe 5-10 tourists at any point within visible range. It was complete peace .. with a sulphurous gaping mouth steaming and inviting you to fall in. The edge was a real edge.. it was straight down to the large yellow stained hole .. you could stop your fall if you were strong and agile enough.. and you could crawl back out if you were talented and experienced enough.. but for most, slipping over the edge meant your life. Girard et Lilianne, je n’ai pas laissé Sylvie approcher le bord !!

It was pretty cold up there .. we unknowingly got our first sunburn that day 🙂 Best travel day ever. And this was only our first stop in Indonesia:) Saurabh was dropped off for supper by his tour operator and had a couple of hours to share a meal and have a final conversation. He had only 4 days of vacation and was scheduled for all of it by his tour. We made a great ally and friend in Saurabh and learned many things about India in the process .. We were sad to see him go…