After a very busy and difficult month in India, we needed some relax time.. we needed something easy. There weren’t many options in this neck of the woods. We had Pakistan to the west.. no. We had Bangledesh to the east. We had a stop over in that airport a few months back and we knew that Bangledesh would be anything but “easy”. To the south was Sri Lanka. We knew very little of this place but had read there were beautiful beaches and a very excellent mainland jungle filled with elephants and ancient ruins. That sounded perfect.

Sri Lanka was the day to India’s night. Everything about this place was the opposite to it’s northern father. Sri Lanka was an island paradise. The traffic followed rules along an organized network of roads and highways. The towns and cities were tame and very clean. The hotels were inviting and “hotel” like. The food was reassuring and sanitary.

We entered the country with no hassle whatsoever with an easy 30 day visa. We exited the airport and weren’t harassed by taxis and tuk tuks. We actually had to ask around to find a proper ride to our first destination of Negombo, a little town about 10 kms from the airport. 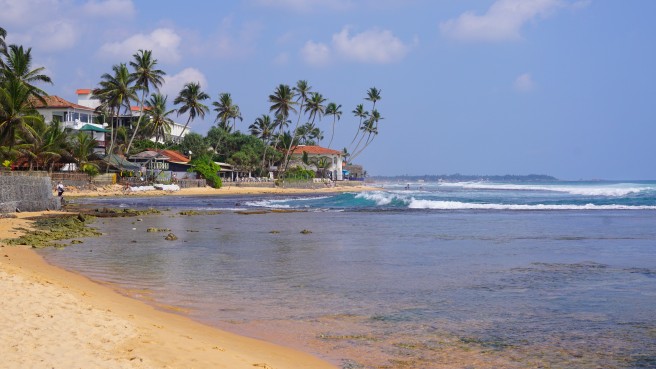 We easily found a place to stay at an excellent guest house, with 3 rooms atop a gorgeous island style house. This place looked like something out of movie the way it was decorated and furnished. Upstairs we had a living area, dinning room and kitchen and 2 balconies at either end. Our room was spotless, with proper AC and a large tiled bathroom. We were floored! We must have gotten lucky tonight. The next morning we sat in our kitchen drinking coffee and researching the island thinking we were Dutch colonials from back in the day. What a great feeling after a month of hard work in India.

That morning, we created a plan to bus it down the coast all the way to the southern end of the island and then head straight up it’s center to hit all the mainland sites we wanted to visit. Afterwards, we would travel west back to the coast and return to Negombo to end our trip close to the airport, at possibly this very same guest house. It was an excellent plan. This was too good to be true. 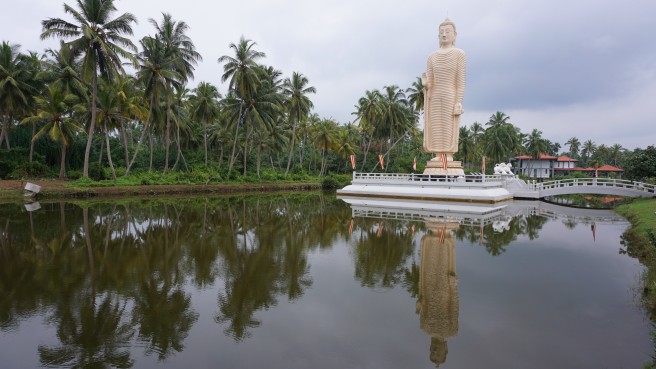 Our couple of days in Negombo kept reassuring us. The roads were well defined. There was no litter or garbage at all. These people kept their environment tidy and the government invested in proper roads and sidewalks. There was no stench at any time.. just fresh ocean air. The food options were all great and varied. Even the shadiest little grub stop looked absolutely fine and inviting. Curries, roti and rice were the rulers of Sri Lanka, as well as an assortment of pastries and sandwiches, which they obviously adopted from the various colonies that came and stayed awhile. Every hotel we stayed at was much like our first one. It wasn’t too good to be true, it was life in Sri Lanka.

The clientele around these parts was obvious from the start. Negombo, and everywhere else in Sri Lanka we would gradually learn, is packed with Ukrainian tourists… just packed! You would be hard pressed to find people of another nationality around here. To generalize a bit, they all smoked cigarettes and drank lots of beer. They all stayed at the nicest hotels and paid premiums for everything from Tuk Tuks to souvenirs. The Ukrainians would be our economic bane for the next 4 weeks. Finding deals would mean distancing ourselves from these lavish tourists. They weren’t very chatty with anyone “non-Ukranian”, so we didn’t exactly make many friends. All in all, aside from raising prices wherever they gathered, they were pretty good people to share the island with. They weren’t loud and gregarious or obnoxious. They weren’t meddling and nosy. They were quiet folks enjoying some time in the sun just as we were. They kept to themselves and never made us feel uncomfortable or unwanted. Go Ukraine!

We did lots of swimming in the beautiful waters of Sri Lanka on many beaches along the west coast. The waves were perfect for novice surfers, and for us it was enough just to hover up and down for hours under the incredible force of the waves. These waters also provided me with some much wanted snorkeling. We found 1 excellent spot in the town of Hikkaduwa. We swam with turtles in the wild and marveled at swarms of fish in crystal clear waters. 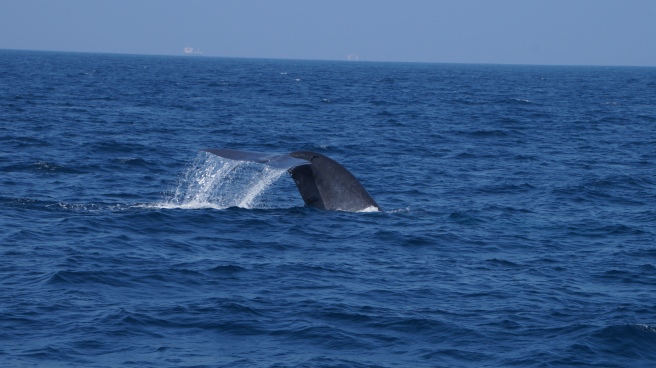 In the town of Mirissa, we took the bait and booked a whale watching tour. We had sworn to never again do such a thing after a complete let down in Panama to see dolphins. This experience turned out to be much better and we were able to see the beautiful and majestic blue whales up close. Our spotters would spot them about a kilometre away from the plume of water they would expel when they surfaced from hiding. The boats would then intercept their path to give the tourists a nice view. The whale would then become afraid and dive below giving us that classic giant tail shot. The whales would stay below for 15 minutes before needing to resurface for air, repeating the touristic cycle. Not cool, we know.. 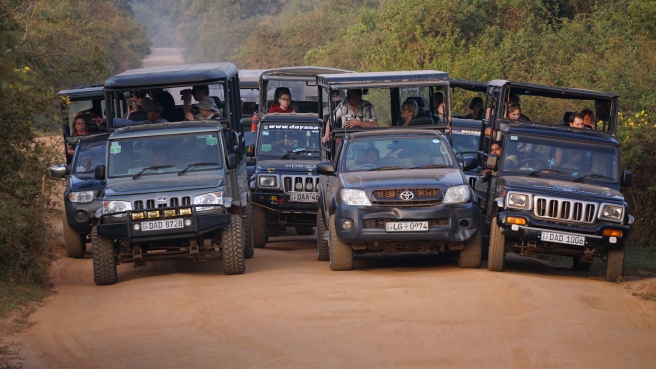 We did a jungle safari in Yala national park which was a bit of a joke. There were so many jeeps chasing animals and views, it made the whole experience pretty lame and cheap. The park itself was gorgeous though and we saw many animals. We saw spotted deer, water buffalo, eagles, a crocodile, peacocks, elephants… but no cougar, which was the goal for that day. 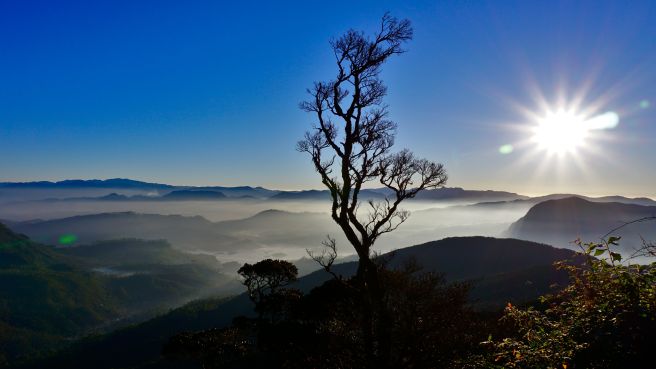 We climbed 2 small mountain peaks, little Adams peak at about 1100 metres above sea level and Adam’s peak (the O.G.) at around 2200 metres. We visited the ancient ruins of Polonnaruwa, one of the oldest capitals of Sri Lanka, and of course we visited the Lion Rock, Sigiriya. This was an excellent fortress on top of a geological protrusion that rose about 200 metres out of the ground. It was an incredible climb and an incredible view from up top. We rented a scooter for the last week and redid the west coast visiting the beaches and relaxing in the ocean once again before moving on out of the country. 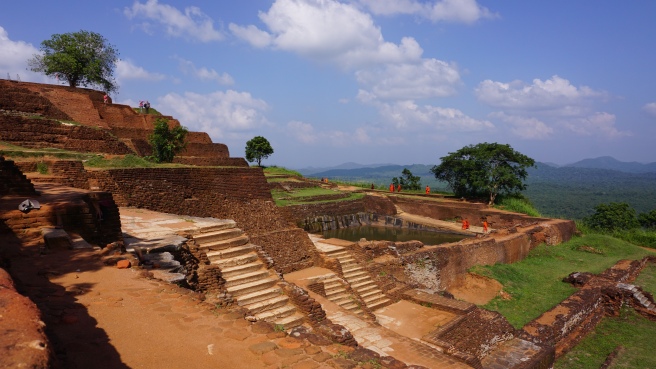 Much like the Gili Islands of Indonesia, there aren’t many exciting things to report about our visit in Sri Lanka. Just some excellent weather, landscapes and ocean. We made a couple excellent friends in Alexander, the German lad who grew up in China, and Yana, the Chinese girl who grew up in Russia. We spent a good week with them during the mainland portion of our trip exploring Yala National Park, Ella and Kandy. We had many laughs and adventures and will always remember our time with them.

Without a doubt, we recommend Sri Lanka to anyone seeking some easy adventure or just some quiet beach time. The food is great, the prices are right, the people are amazing, the sites are awesome… We can’t say enough good about this place. Book it!

Check out an itinerary we prepared HERE.