Back in Bali, where we planned to spend the final week of our trip .. We had 2 goals.. to visit the islands of Lembongan and Ceningan and to visit the town of Ubud. We did both 🙂

To get to Lembongan, we needed to take a ferry or a fast boat from Sanur Beach .. of course, our flight was late and it took forever to claim our baggage and break free from the airport. Daylight was burning !! so we hopped in a cab .. Sanur Beach is a strip of hotels and businesses along a major road on Bali so it wasn’t very evident how or what to do .. we opted to be dropped off at the major beach there and then search out the transport options.  To save on time, we chose the fast boat. It cruised across the ocean nicely jumping massive hill like waves with ease .. 30 minutes and we were at Lembongan. We found a scooter right away and found ourselves a very sweet bungalow… probably the nicest bungalow we have ever had. But of course, you always have to sacrifice something when it comes to accommodations .. they are NEVER perfect. No matter how hard you search the room when considering it, you only find the warts once you’ve paid.

This particular bungalow was immaculate .. a second floor pad with a nice terrace .. black painted wood .. beautiful tile floor throughout.. a bigger than king size bed and lots of room to move around. So what was wrong with this room ? Well, all the bathrooms in Asia are the same .. an excellent design if you ask me.. the one room concept .. the shower simply a fixture on the wall .. the entire bathroom is the shower and there is always an extra high pressure hose beside the toilet to spray away any mess you may have made. Very clean .. No shower door .. just an extra large bathroom (usually) to accommodate the standing room for your shower. Some of them have a lip in the tile to separate the water from the toilet area .. This particular bathroom didn’t have the lip .. which is fine when the bathroom floor is properly slanted towards the drain .. As most construction in Asia, things are built beautifully, but they haven’t mastered construction like Mike Holmes .. There are faults everywhere usually having to do with moisture and wood in the wrong places .. usually where tile and wood meet, you will see rot and mold .. whoa, getting off track – This bathroom floor was no longer slanting towards the drain, so after a shower, the floor had about half an inch of water. This would be a huge problem back home in our socks .. but here, this is not a “problem” .. your feet dry within 2 minutes anyways in this weather and we have been barefoot now for 5 weeks .. all good – Just to say though, the room is never “perfect”.

Back home on Google Earth I was searching the coastline of Bali and the surrounding islands for turquoise water .. easily accessible turquoise water .. I found a very cool looking bay off the smaller island of Ceningan right beside Lembongan.. and it turned out to be a popular cliff jumping area. Cliff jumping into water that is clear as day .. This would be our training ground for high jumping into water ! We would make up for having chickened out at the waterfall in Labuanbajo. I had been looking forward to this for weeks .. The roads were brutal on this island .. Timmins style roads .. complete crap – but at least this place has an excuse .. it’s dirt poor. We traded in the rattled scooter for another Kawasaki dirt bike .. for 3 days woohoo 🙂 We traveled to the bridge between Lembongan and Ceningan .. a very cool single pass suspension bridge over loads of seaweed gardens between the two islands. Using our GPS we made our way to the spot I had found … called the Blue Lagoon. It was a bay alright .. with cliffs at it’s edges .. and there was a spot for the cliff jumping … and the water was sooo clear .. the area was from a post card .. But the water was huge .. the waves enormous – I don’t mean white caps and rolling classic waves .. I mean hills that move swiftly .. hills the size of houses .. one after an other .. smashing into the cliffs. Scary sh*t .. super scary. And upon further inspection, the ladder that lead out of the scariest water I have ever seen was no longer there .. just a rope daring you to try. No way .. small groups of people would show up every 15 minutes with the same aspirations .. but no one would dare jump into the sea here .. there was no way back up.

The view from here was amazing and we sat watching these monster waves crash into the cliffs for hours .. In some spots, open caves entered the cliffs and when large waves entered the caves, the cave would spit out huge sprays of water. A particular spot that demonstrated this phenomenon quite well was called Devil’s Tear. In Indonesia they believe heavily in spirits .. the good spirits live in the mountains, and the evil spirits live in the ocean .. 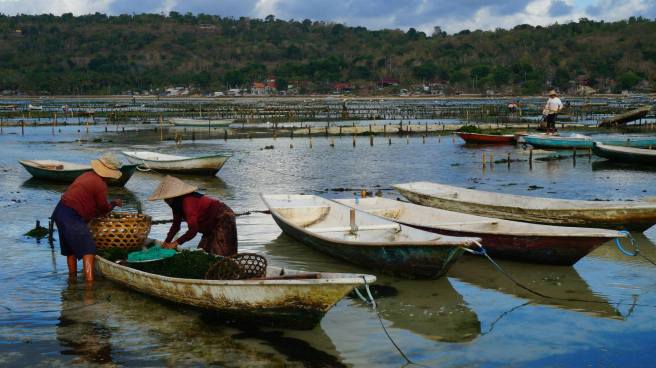 There is not much else to explain about our time on Lembongan .. just 3 relaxing days of exploring by dirt bike. I guess I could mention the whole religious dynamic happening here in Indo. First of all, you have the largest Muslim population in the world living happily alongside a very large Hindu population. On Java, it was mostly Muslim .. In Flores was the same thing .. Bali was mostly Hindu. But there are both religions everywhere .. Mosks everywhere.. The call to prayer 3-4 times a day .. Small banana leafs boxes everywhere .. The Hindus make them daily .. after their first meal, they put small offerings of food in them .. sometimes little snack breads .. candies .. fruits …with an incense burning. They are EVERYWHERE .. littering the streets .. chickens pecking at them .. cats and dogs scavenging from them .. old dried up ones from a week ago beside the fresh one put out this morning. Some are on shrines, some are on the sidewalk and some are outside your hotel room door .. It’s pretty cool how devoted they are to .. this. However, when talking about money and life with the locals, they often talk about how poor they are .. and how they only have enough money for “food” and for “temple”. I dug deeper with my questions to learn that “temple” means each family builds their personal temple at their home. Depending on their financial situation, this temple could be one small statue for the offering, to more elaborate full on buildings with statues and pillars and rooms .. There are huge yards everywhere in the country filled with monuments and statues for sale .. like lumber yards back home, only here they are giant heads, water fountains, pillars, special stones and bricks, statues of various gods.. kind of like a Mindcraft store to build and decorate your castle. A serious business .. $$ And every day they are supposed to make offerings to the gods to give them good luck and good life as they put it. Again, there are stores everywhere that sell the banana leaf boxes .. the minimal small boxes and the larger more expensive ones .. and all the stuff you use to decorate it like colorful linens and the incense. A smaller business $$… So, as poor as they are, it’s a daily expense for them to entertain their religion .. as well as a larger investment for the personal temples they all seem to have. -Insert critical thoughts here-

The amazing thing is that these 2 religions coexist in Indonesia .. with no worries or apparent hostilities .. unlike some other places in the world .. *cough cough .. And I have to say that the people here were the friendliest and nicest people in any country I have traveled to. They greeted you with a smile all the time .. eager to please .. eager to help .. sooo helpful ! It didn’t matter if you were purchasing something from them, or eating at their restaurant or staying at their hotel, they were willing to guide you the right way .. wherever it was you wanted to go, even if that meant their direct business competition.. no worries at all. Perhaps they are all amazing actors just pretending to like us .. but I’ll take it. A friendly face half way around the world goes a long way for your travel mood and morale. The Muslims here dressed accordingly. I’ve seen the clothing here and there on tv and in Toronto .. but here it was hard core dress code. The men wore their clean white outfits with the hat .. and the women wore the head piece .. not covering the face, only the hair and neck .. a type of hoody. I was starting to see the individual styles of these head pieces near the end .. liking certain ones better than the others.

But again, I have to stress how frikken nice and helpful the people were .. I could only conclude that it was their religion that made them so “acceuillant” as the French say. Because the religion was front and center ..BAM .. in your face from day 1 .. at 4:30 a.m. with droning, sometimes off-key, call to prayer blaring over the loud speaker… the Hindu banana boxes everywhere .. the dress code in full effect .. the Hindu shrines and personal temples in every front yard .. the mosks .. everywhere all the time. After 4 weeks of Indonesia, I firmly believe their religion asks them to be good to others, and that they actually follow it. I have a new attitude towards .. religion. Still not for me, but whatever keeps your mind healthy, happy and at peace, I say “go for it!”.